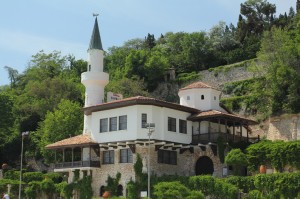 Thanks to its picturesque geographic location the town of Balchik has been the cradle of several important cultural civilizations over the ages. The Palace in Balchik is a popular site for hundreds of thousands of tourists visiting north-eastern Bulgaria.

The Architectural and Park Complex represents a cultural mosaic, a mixture of religions, a unity of communities and customs. It offers excellent opportunities not only to people coming here for recreation but also for the culture-minded, interested in history.  The Cultural Centre ‘The Palace’ is a state cultural institute which carries out a number of major and supporting activities aiming at preserving and promoting this cultural landmark.

Cultural Centre “The Palace” – Balchik is a state cultural institute, established with an act of the Council of Ministers on the advice of the Minister of Culture. Its major goal is to maintain and preserve the monuments of culture on the site of the complex and develop their potential.
It has established a policy of restoring and enriching the wealth of cultural, historical and natural sights. It works towards creating cultural values and developing cultural and cognitive tourism in order to promote the cultural and historical heritage of the country.
The tradition of organising cultural events in “The Palace” is strong. The environment is especially suitable for holding important national and international festivals, promoting young talents, mounting exhibitions. “The Palace” can be the perfect venue of training sessions for artists and sculptors, drama sessions, small theatre performances, shooting films and clips.
The work of artists and intellectuals on the premises of the complex and the environment, conducive to creative work and art, makes the popularity of the complex even greater. All the cultural events happening here combined with the romantic atmosphere of the place create the sense of aesthetic pleasure. Visitors will cherish the memory of a joyful day in the world of art and beauty.

The Architectural-Park Complex ‘The Palace’, in Balchik was started as a residence of Queen Marie of Romania (1875-1936).  She called it by the name of ‘Tenha Yuvah’, which translated from Turkish means ‘the lonely or secluded nest’. Today the popular term is translated ‘The Quiet Nest’. The Queen visited the town for the first time in 1921 in the company of her son Prince Nikolay, when she was fascinated with the beauty of the bay.  The construction of the residence started in 1924 and was completed in 1936.

At the first visit of Queen Marie to Balchik, the place had already become the home for the summer villas of well-known Romanian families of artists (Shtork, Satmari), slowly the little town developed as a favourite resort of Romanian intellectuals.

Along the wooded slopes descending to the sea, west of the town, Maria found herself at a magical ‘spot (…), that I should have (…)’. ‘All my life I have dreamt of such a place, imagining it could only be found in Italy, but here it is in Balchik”. In addition to the scenic location, Balchik was the southern-most outpost of the new Romanian territories. It was a good reason for the queen to decide that the place was perfect for the construction of a royal residence.

She bought the strip of coastline from its owner – the banker from Bucharest Jan Crisoveloni in December 1924 and she planned to build there ‘an artistic whim’, created to capture the nature of her authentic style and taste. Construction work started in 1925. One of the first buildings was the queen’s villa ‘The Quiet Nest’.

Together with the building of the villa the gardens and alleys of the complex were being laid, the terrain was reinforced, reconstruction of the old water mills followed. The whole ensemble of buildings and park was slowly growing, a self-contained household with its own guards, power station, post-office, dining area, a nursery for flowers, a market garden, orchards and vineyards were finally created.

Construction work finished in 1936. Two years later the queen died, and two years after that, in 1940, Southern Dobroudzha, together with Balchik, was incorporated into Bulgarian territory again.